The interim government in Kiev says Ukraine will leave the commonwealth of post-Soviet states and force Russians to apply for entry visas, and plans to ask the United Nations to make Crimea a demilitarized zone.

The raft of measures – a response to Russia’s incorporation of Crimea into its territory following Sunday’s referendum – was announced by National Security and Defense Council chief Andrey Parubiy during a press briefing in Kiev.

The Commonwealth of Independent States (CIS) was founded to maintain economic and security links between former Soviet republics when they became independent states in 1991. It initially included the 12 non-Baltic countries, though Georgia quit after the Ossetian conflict in 2008.

END_OF_DOCUMENT_TOKEN_TO_BE_REPLACED

A newly created counterterrorism network has met in Interlaken for Swiss-led talks on how to move forward and cooperate with other international bodies.

Switzerland is one of 28 countries that joined the Global Counterterrorism Forum in September. The conference on Thursday and Friday was attended by around 100 representatives of the member states, the United Nations, and the European Union.

Opening the conference, Justice Minister Simonetta Sommaruga said that in order to eliminate breeding grounds of radicalism and terrorism, it was crucial to strengthen the rule of law and criminal prosecution. END_OF_DOCUMENT_TOKEN_TO_BE_REPLACED

Feb 14 (Reuters) – In a tiny office on Zeestraat 100, Alice Helbing puts the final touches to a script for an imaginary counter-terrorism exercise in the Netherlands. A few doors down the corridor, staff from a legal aid group are digging into real war crimes in Ivory Coast.

Nearby at Humanity House, a small museum devoted to raising awareness about aid for the victims of disaster, visitors can find out what it’s like to be a refugee – to have to flee your home, leaving dinner on the table, with no money, no mobile phone, no passport, just the clothes you are wearing.

Behind its staid Dutch exterior, The Hague has become a hothouse for human rights ventures and international legal services, invigorating the local economy with new jobs and an influx of mainly foreign professionals.

But it has also become so much of an international hub that sometimes locals feel like strangers in their own town.

“The Hague has become an incubator, a sort of legal Silicon Valley,” said one diplomat who follows the courts.

Many of the rights and legal groups are housed in two utilitarian office buildings near the city centre: At Zeestraat 100, staff from non-government organisation Africa Legal Aid rub shoulders with game designer Alice Helbing and her fellow conflict resolution trainers from the Pax Ludens foundation. Around the corner, Laan van Meerdervoort 70 provides space for groups like the United Network of Young Peacebuilders.

The policy-makers, foreign or defence ministry officials, and students who attend Pax Ludens’s training sessions on negotiating tactics can role play to get a taste of what it is like to be U.N. Secretary-General Ban Ki-moon, or to head the Israeli and Saudi Arabian delegations and hold secret talks over the Arab-Israeli conflict.

END_OF_DOCUMENT_TOKEN_TO_BE_REPLACED

What I learned as the armchair general of a paper Israeli air force.

This weekend, I sat down on my dining room table and prepared to set the Middle East aflame. I was playing Persian Incursion, a board game of a hypothetical Israeli air campaign to destroy Iran’s nuclear facilities. Or, at least so far it’s hypothetical. On Tuesday, Nov. 8, the International Atomic Energy Agency released a report suggesting that Iran has continued to build up its nuclear weapons program. And with Israel making serious noises about dropping bombs before Iran develops The Bomb, fiction could soon become reality. I set about seeing which side would win.

Persian Incursion is a paper war game, one of those fascinating yet complex beasts that appeals to armchair generals — it combines the fun of a strategy game like Risk with the intellectual stimulation of reading contemporary nonfiction. The game was co-designed by techno-thriller writer Larry Bond, best known for co-authoring Red Storm Rising with Tom Clancy. (Clancy actually tested the plot for another bestselling book, The Hunt for Red October, on Bond’s Harpoon naval war game.)

END_OF_DOCUMENT_TOKEN_TO_BE_REPLACED

For more than a month, the U.N. Security Council has deliberated on the question of whether the Palestinians meet the basic requirements to become a U.N. member. The exercise, which involves countless hours of debate and legal analysis by U.N. member-state lawyers, was largely pointless. Everyone knew going into the discussions what the outcome would be: a split, paralyzed, Security Council incapable of rendering a judgment.

So, what did the Security Council do next? It instructed the U.N. Secretariat to provide a written summary of the council’s internal deliberations, outlining the differences — but in classic council fashion concealing the identity of countries that weighed in on the matter.

At the end of the day, what matters is whether the Palestinians proceed, as they insist they will, to press for a Security Council vote on Palestinian membership.

END_OF_DOCUMENT_TOKEN_TO_BE_REPLACED 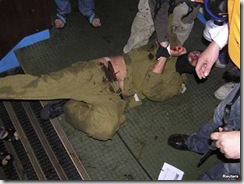 Pro-Palestinian activists hold down an Israeli commando on the Gaza-bound Turkish ship “Mavi Marmara.” Nine Turkish nationals were killed when Israeli forces boarded the ship in international waters in 2010.

How does Turkey’s ruling Islamist party react when it gets a report it doesn’t like from the United Nations?
By yanking diplomats, threatening military conflict with a neighbor, and menacingly eyeing that neighbor’s new yield of natural resources.
If the General Assembly ever does something really provocative and votes on a resolution recognizing the Armenian genocide or the right of Kurdish self-determination, you can bet that Turkish Prime Minister Recep Tayyip Erdogan will make the prison guard in “Midnight Express” look like Florence Nightingale.

END_OF_DOCUMENT_TOKEN_TO_BE_REPLACED

The first stop in a tour of Ron Prosor‘s gallery of memories is not the portraits of his three children and wife hanging from his office wall, or the pictures of Israel’s new U.N. envoy shaking hands with ex-presidents George W. Bush, Bill Clinton and former British Prime Minister Tony Blair.

It’s a photograph that captures a moment during negotiations over the 1994 Cairo Agreement, when the late Palestinian leader Yasser Arafat, confronted by a visibly livid Egyptian president Hosni Mubarak and Israeli Foreign Minister Shimon Peres, refused to sign off on a territorial provision from Oslo Peace Process.  In the end, Arafat did ultimately sign the landmark May 4 accord establishing Palestinian self-rule in the Gaza Strip and the West Bank.